Walter began volunteering at CJAM back in 2009 while completing an undergraduate degree at the University of Windsor in Political Science and Communications, Media and Film. 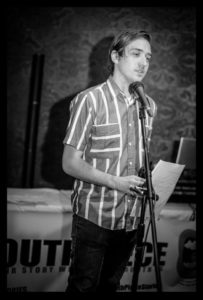 He ended up working to assist CJAM’s Volunteer Coordinator and Music Director at the time under the Work Study program. His most recent podcast, Life in a Border Town, chronicled local Windsor and Detroit stories and has been played on CJAM in its entirety multiple times. He ended up co-hosting the spoken word program Del Cafe Pombo and hosted the music program Nite Flights for a number of years. He’s also been involved with volunteering at CKUT in Montreal, WNSR in New York City, and also volunteered at the New York Public Library interviewing New Yorkers for their Community Oral History Project after finishing his Master’s Degree in Design and Urban Ecologies from The New School. He also completed the Transom Travelling Radio Workshop at 101.9 FM WDET Detroit.

Catch the revival of Night Flights on Thursday mornings & be on the lookout for upcoming news on CJAM’s annual Joe Strummer Day to Confront Poverty & Homelessness marathon happening December 22nd!

— This review’s release was delayed due to school — Happy Read More →
The National Campus and Community Radio Association is asking campus radio Read More →
— This song review list was originally to be posted in October, but its Read More →