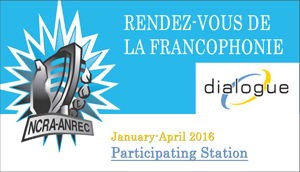 Tune in every Monday at 4:30 PM from now until the end of March for Rendez-vous de la Francophonie!

Rendez-vous de la Francophonie is an annual celebration of Canada’s membership in the Francophonie and promotes the French language and its numerous cultural expressions. Check out the project website at www.rvf.ca.

La Francophonie is an international organization representing countries and regions where French is the first or customary language and/or where a significant proportion of the population are Francophones and/or where there is a notable affiliation with French culture. Canada is one of its 57 member states. A full list of all members and observers can be found here. The newly-appointed head of the organization is former Canadian Governor General Michaëlle Jean.

To expand, the 2016 version has had 23 NCRA member stations participate in producing 30 minutes of audio which will be aired across the producing stations and offered to other NCRA stations between the 11th of January to the end of March.

This project is funded by La Fondation canadienne pour le dialogue des cultures and in partnership with the NCRA through the Community Radio Fund of Canada.