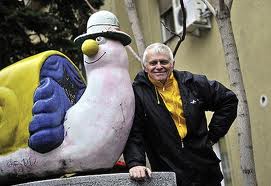 Also known by his nickname Branko Kockica (Branko the Little Cube), is a Serbian actor popular for his roles in children’s TV shows.

He became famous for his work on a television series for children entitled Kocka, kocka, kockica (Cube, Cube, Cubelet) which was on the air for several decades. His work is admired in all region of former Yougoslavia.