CJAM wants you to get to know our DJs! 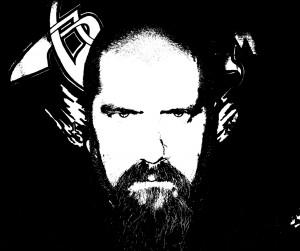 // How long have you been involved with CJAM?
My first gig as a CJAM host began in 1984 shortly after CJAM hit the public airwaves. I hosted various punk and metal shows in numerous time slots until 1987 when I moved to Toronto where I continued to host metal//hardcore radio shows at CHRY – York University and CKLN – Ryerson University. Upon my return to Windsor I became reacquainted with CJAM and began hosting Aggressive Rock in February 2017. When you add it up I have been involved with campus-community radio for roughly 24 years.

// How did you become involved as a CJAMmer?
I began attending the University of Windsor in 1983 as a Communication Studies major. Getting involved in campus broadcasting was a no-brainer.

// Who is your favourite band?
I discover a new favourite every week. Each show showcases a new crop of discoveries. With a personal music library that numbers in the thousands, it would be impossible for me to pick one artist that stands out as a favourite…but i’ll try. I’ve been listening to Discharge for more than 3 decades & I still find their music as awesome & relevant as I did when I first heard them.
Black Sabbath, the Stooges & Motorhead put out some pretty good music too.

// My other life consists of…
When I’m not actually listening to music I’m listening to the music library in my own head.

// What was your best live music experience?
Poison Idea @ the Siboney Club in Toronto 1988.

// Who do you need to see live?
I’ve witnessed Bolt Thrower live on 3 separate occasions. I can die happy.

// What do you love most about CJAM?
The excellent staff, other programmers, and the passion they bring to their shows, and the commitment and support of Windsor/Detroit alternative music. I’ve had the pleasure of working at 3 campus radio stations & I can state without hesitation that CJAM is special.

// Anything else you’d like to add?
Chances are if you’re reading this you already know that CJAM is a vital component of the alternative political & musical landscape. A community radio station cannot survive without the support of that community & I urge you to get involved.
————————–———-
Want to hear Aggressive Rock?
Hear it live on Tuesday nights 10:30pm-midnight on 99.1 FM, on our livestream at www.cjam.ca – on the Uwindsor app or TuneIn app.

You can also Check out the CJAM archives // Simply click on the programming tab – find the program & stream or download it from the website. It’s that easy!